If you look for an alternative to Microsoft Word, try Atlantis Word Processor. Read why it's one of the best commercial solutions.
Short comparison: I've used Microsoft Office suite for at least 10 years. I started with 97 and ended up with 2010 version. I still use it occasionally. The problem is that 95% or even more of the time I used only Microsoft Word. If you're like me, Atlantis Word Processor could be a real alternative.
Financial benefit: As I said, if you don't need all the other stuff that can be found inside an office suite, the price of 35 $ for Atlantis Word Processor is reasonable.
Try Atlantis: I encourage you to try the software before you buy it. It works as a full version for 30 days so you have plenty of time. The setup file has around 3 MB and installing the program is easy and fast. By default, right-after the setup process, the program will launch automatically. That's the main program interface: 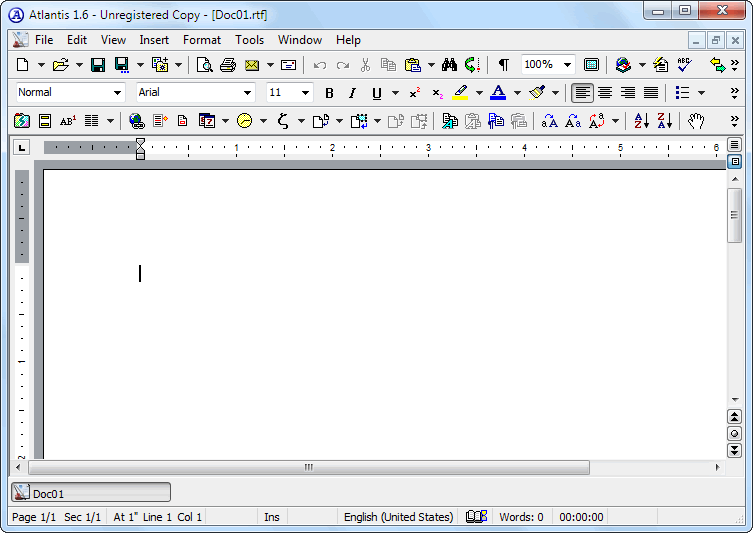 First impression: I resized the main window (for a smaller screenshot) but judging the program only by his main interface, I would say that it looks like an old version of Word. I don't think it's a bad idea. It's quite an advantage because:
1. No learning curve required just install the program and you already feel familiar with it. Maybe it could receive a restyling to look a little more modern such as modern buttons and refreshed icons. The ergonomic is good despite the simple design.
2. All the other free or shareware word processor were inspired by Microsoft Word so I don't think it's a good idea to come up with a radical change. After all, this program is for people that write and want to save in different formats.
Quick overview: I will show you just a couple of features. Keep in mind that you can read more about his features here. I will also skip the "buttons" from the main interface. Just like other similar programs, most of them are a shortcut for tab navigation.
File: From "File" tab you can perform several actions such as: creating new documents, open, close, save and others. The most interesting feature from this section is "Save as eBook" action. Yes, you can create eBooks with this software. The missing piece of this section: you can’t save in PDF format.

I will skip "Edit","View" and "Insert" tabs. There are similar to any other Word processors. As far as I've noticed they don't bring anything else that you can't find at other advanced document processors. I made a screenshot with all of them.

Format: This area is not different from other word apps but it has a couple of options that I liked. Take a look at "Fonts", you can add several effects. "Change Case" is also interesting (seen that at professional text editors). Check the "Column" option. I liked that much as it allows to separate content on multiple sections.

Tools: This is the most feature-rich area of this program. From here you can customize this application from "Options" section. Disable the sounds or leave only those that you like. Install the program to an external device such as an USB stick (portable). The "Overused Words" is just a primitive feature compared with StyleWriter software but it's good to have it. I kept the most important features separately.

Spellcheck: All major word document processors and several powerful text applications will come with such a feature. Atlantis allows you to make use of other spellcheckers. Go to - Tools - Options - select "Spellcheckers and Dictionaries". From there you can customize it such as adding a new one.

Autocorrect: Compared with other similar tools, Atlantis is way better and what's more important, it is highly customizable. If you need to change the current settings, go to Tools - Options - select "Autocorrect Options" and make desired changes. Once you're in this area, don't forget about "Exceptions", "Rules" and "Other Exceptions" sections. I have highlighted them.

Power Type: That's my favorite feature because it allows you to speed up your work by memorizing the words you use often. That's useful, I'll show an example right-away. Meanwhile, here's how to disable or enable Power Type. From main program interface go to "Tools" and select "Power Type".

I'll skip the last two tabs "Window" and "Help" and I will show you a screenshot with Power Type feature in action.

Conclusion: The program works only on Microsoft Windows. It doesn't have an export to PDF feature and lacks support for tables. Fortunately, Atlantis Word Processor has other features (list available here)  that you won't find at many other similar programs. I forgot to mention many of them such as: writing time (how much time you've spent at your text) or encryption of your documents (using proprietary COD format) and several others. Support for the program is available by email or forum (since 2001). I've emailed them in a Sunday and received a reply in the same day. My final recommendation is as honest as possible. Download and test the program for 30 days, make sure that you read the Help section and you're familiar with his features. Overall, it's worth every penny in terms of a reliable document processor.
Tweet